Welcome to my annual… Well, post since I haven’t written one for exactly a year and I’m not sure where to go with this New Year’s Eve edition. Peer ahead? Look behind? Just be in the moment? That last one is the place to be since it’s the only place we really are. Man, this writing thing is a struggle now. Maybe I’ll just tell a story.

Six years ago tonight was the big fall. Ice and gravity conspired to crash my evening to the pavement in a microsecond slam of glass, ribs, and cartilage. No blood, though. The only red liquid running down my street that night was the contents of a Hitching Post Pinot Noir crushed between my ribcage and the street. With the shiv of pain in my side from every breath, I didn’t have the focus to realize my left hip also slammed into the uncompromising icy asphalt.

The ribs slowly healed and the hip degenerated. I saw an Orthopedist a couple of times whose advice was, “when it affects your quality of life then you can have it replaced.” Years passed and gradually normal life stuff became difficult if not impossible. I’m talking about things like putting socks on and getting on my bike. Now, whether I’m buying a $6.99 Fitbit Sense replacement charger or contemplating hip replacement surgery, I research it. I quickly found a podcast called New Approaches to Hip and Knee Replacements, learned about anterior (access through the front) hip replacement surgery, further researched Dr. Matthew Sloan, and made an appointment to see him. Although I’d been experiencing pain in both hips and knees, x-rays showed healthy cartilage and no issues in either knee. The opposite was true for the hips, especially the left one which was “bone on bone” with bone spurs. Real ones. Not the fake kind to avoid military service, but I digress. Anyway, we scheduled surgery for September 27th.

I’ll add some gory details coming up, but the entire Emerson Hospital staff was fantastic. Now for the gory stuff. After receiving a “spinal,” I laid on the operating table mildly freaking out over not being able to move my toes (that’s kind of the point of the procedure), but I was soon mostly unconscious from the accompanying “twilight” anesthesia. Part of the procedure included “robotic assist” to ensure precise measurement of cuts and placement of the new hip joint. Anyway, at one point in the procedure, an attendant said, “Uh, he’s starting to move.” I was told going in that the spinal could wear off and that they’d give me general anesthesia if it happened. It must have been during this time when I heard or dreamed what sounded like Wiley Coyote hitting a steel anvil with a sledgehammer. 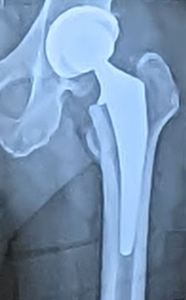 It was an in by 6 AM, out by 6 PM day, and I was able to get by on a steady diet of ice packs and acetaminophen. I used a walker for a couple of weeks and then crutches for two more. Recovery was excellent, but physical therapy can be rough. I’m still in it and what I’ve found is that when you’re babying a painful joint, you tend to avoid moving it much so the range of motion and everything that makes that range possible (muscles, tendons, nerves) kind of goes dormant. Reanimating all of that through stretching and resistance exercises is painful, but so worth it. Oh, and if you ever go through this, don’t jump right back to work – like the very next day. Although I was just sitting in my home office, healing from a serious wound requires both physical and mental rest so that all of your being can be focused on healing.

I’m still in PT twice a week and exercise at home, including cardio on a stationary bike. My “resolution” for 2023 will be to make those home workouts a consistent 3x per week thing, but while the left hip has NO PAIN, the right one is yipping for attention. I’m hoping to get through the snow-clearing season and “have some work done” on my right hip in mid-March with a goal of being outside riding my bike by May.

Oh, and the broken ribs thing? I was on my way to neighbor Beth’s house across the street when the carnage ensued. My neighbor since became my fiancée, but she recently sold her house and moved.