The waves of heat rising from the near liquefied asphalt blurred perception of the 3 basketball courts beyond the one we were on in a flat parking lot of Stonehill College. It was circa 1975, and somehow my single-Mom financed not one, but two weeks at the Sam Jones – John Killilea Basketball Camp. Now for any Celtics fan of a certain vintage, Sam Jones has name recognition. His shooting clinic was just that, a clinic. The man started by sitting on the floor directly under a basket and arched a shot up and in. He proceeded to bush himself back about three feet at a time and still sitting, rained down shot after shot until the last one from the top of the key! Then he stood up and really started shooting. He also took about 8 of us “2-weekers” to Burger King on the Saturday night between weeks. Yep, Sam is the man, but as his teammate, Bill Russell once said, “Defense wins championships,” and John Killilea was a defensive genius who earned two NBA championship rings as an assistant coach with the Celtics. 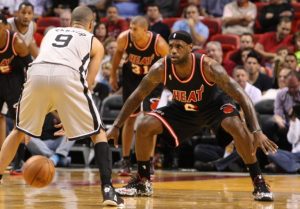 The 30 or so teenagers were already hot when Coach Killilea took five minutes to teach us the proper defensive position. Legs spread a little more than shoulder-width, knees bent so your thighs are parallel with the hot surface below and with arms extended out to the sides and heads up. Simple right? Why don’t you try it right now? The coach went on to talk to us about defense. For the next 45 minutes of the clinic. He’d occasionally have us shuffle side to side, up or back, but for the most part, we were expected to assume the position and stay in it while feet, thighs and backs burned. Coach raged at anyone that let their ass defy gravity, “What are you doing? You look like you’re trying to shit against a wall! Get your ass down!” Kids were crying. A couple gave up and at least one I recall collapsed (he was OK). With about 5 minutes left in the clinic, Coach Killilea let us stand up and relax, but he kept talking. I’ll never forget what I learned in that clinic. He talked about how everyone wants to be the hero and score baskets, but not everyone wants to put that same effort into defense.

Finally, pointing at his chest, he said, “What you did today takes heart. This is what defense is about. It’s about heart. It’s about who wants it.” Then he walked away.

Tonight we’ll find out about the heart of this Celtics team.